Seems no matter how hard I try, I just can’t seem to get a handle on the toy madness in our house!

Toys, toys, and more toys. Everything from exersaucers to tiny polly pockets and everything in between. In every room. Everywhere.

We do have a designated playroom, so why is it that they aren’t content to stay in there?  I blame toys with wheels.  It’s too easy an escape, lol.

And have I shown you my latest kitchen decor? It’s oh so chic… 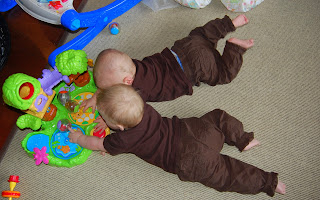 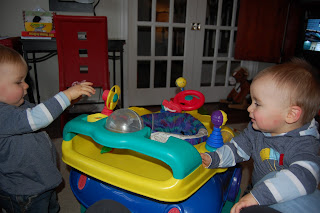 When our twin baby boys were old enough to start playing with toys, I had to figure out a solution that would work for my 6-year old daughter. You see, she was used to ruling her fortress (aka the playroom) without anybody challenging her territory. But now, she had four other little (boy) hands grabbing her Barbies, destroying her tea parties, and ripping up her masterpieces.  Not to mention that most of her things are small enough to be severe choking hazards. I’m pretty sure that Barbie’s stilettos and Polly Pocket’s surf board might hurt on the way down 😉 .

Sometimes she learned to have fun with it, but more often than not, she didn’t.

Yes, there’s been many a toy crisis in Kingdom Toy Madness…

So last summer we purchased a storage unit for the playroom from Ikea (from the Expedit series).  This allowed me to put the baby toys in the lower cubes, and put my daughter’s teensy wheensy things in containers (see aqua tubs) in the higher rows.  Bingo!  I thought that I had struck gold. 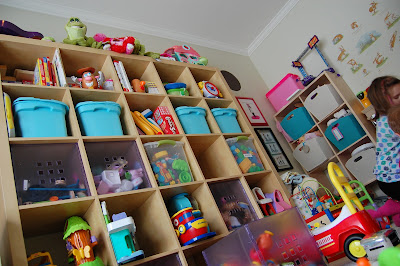 But, no, not really.  It was only a matter of time, before that system broke down too.   As soon as they played together at the same time, things got all mixed up.  Clean up time meant let’s dump our stuff in the nearest bin!

I just need a little reminder now and then. 😉

PS. So how do you manage the toy chaos in your home?  I’d love to know!

Have a fun-filled weekend!