I have a funny one to show you today in my series on Vintage Home Decor Ads. Do you remember colored toilet paper?!? Until I saw this 1980s ad for pink Charmin toilet paper, I’d almost forgotten that it ever existed!  Toilet paper in colors such as pink, lavender, light blue, light green, and light yellow was commonly sold in North America until the 1980s.  So how in the heck-a-leck is this related to home decor you ask?

Well, believe it or not, the entire raison d’etre for colored toilet paper was so you could coordinate your bathroom.  An e-how article devoted to the topic explained that, less than 30 years ago, a totally color-coordinated bathroom was in vogue–down to the toilet paper. Colored paper, frequently accompanied by a fragrance, came to be expected in the well-dressed home! (Source: eHow) 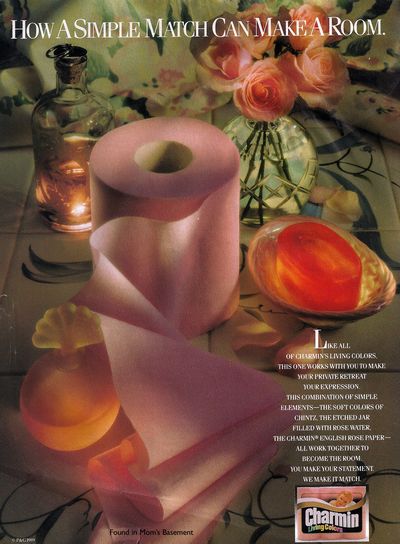 Like all of Charmin’s living colors, this one works with you to make your private retreat your expression.  This combination of simple elements – the soft color of chintz, the etched jar filled with rose water, the Charmin English Rose paper, all work together to become the room.  You  make your statement.  We make it match.

Who knew that a roll of pink toilet paper could bring such harmonizing effect to a room?!? (Insert snickering here :-))

Today, tinted toilet paper has all but disappeared from the market. Such a shame.  (Insert more snickering here :-))

By the late 1970s, with the rise of environmentalism, apparently concerns began to surface that colored toilet paper was bad for the environment because of the dyes used in it. Over the next decade, a number of health-related concerns were also raised by some in the medical field.  Consumer demand declined, and by 1987, the FDA placed a ban on dyes used in the coloration of toilet paper due to an increased risk of health problems.  Most major manufacturers  stopped producing it, effectively ending the era of the pink toilet paper roll.

And that ends today’s lesson in completely useless but hilarious information.

Enjoy the rest of your Saturday, peeps!