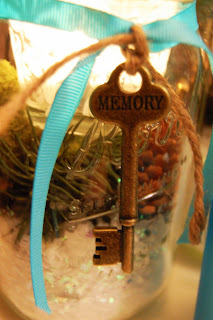 If you caught my last post, you might recall that one of my favorite ideas I’ve seen this Christmas has been simple little jar lanterns filled with frosty snow, twigs and other delights.

Well, you guessed it, I just had to make my own!

As my 6 year old says, it was easy peasey lemon squeezy.

In fact, I can’t imagine an easier craft.

I had some mason jars on hand from pickles and jam (who doesn’t, lol?), but I bought a couple of really large ones at Michael’s, all together, they were under $6.  I had some fake snow filler leftover from past projects (this stuff is available at any craft store), and I used a large spoon to fill each jar about one-third full.  Then I threw in some evergreen twigs and moss and sprinkled a little more snow over the top.

The votive holders that I used would not fit through the top of the jar, my original plan.  However, they sat nicely in the opening, giving a kinda floating effect, so I went with it. (My general rule: Even if it doesn’t work out the way you plan: own it!).  Finally, for the bling, I tied some grosgrain ribbon and twine around the top, and added these adorable junky little word keys that I found at Michael’s. These were a little pricier than I would have liked ($16), but I couldn’t resist. If you have any old keys on hand, they would do. (By the way, the entire collection by Jim Holtz Idea-ology is AMAZING). 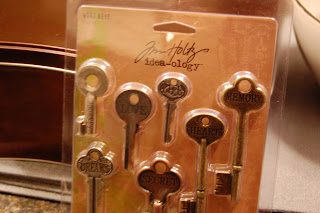 So here they are!  What do you think? 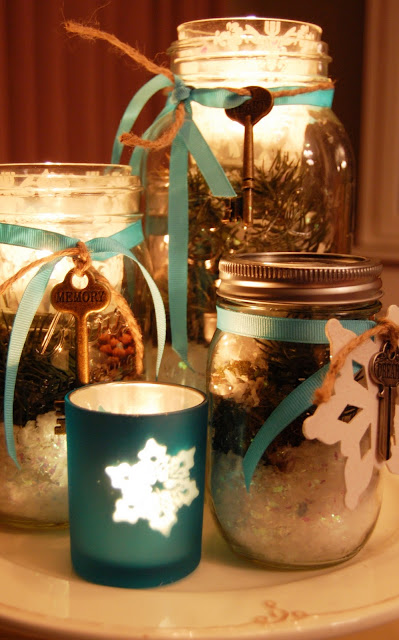 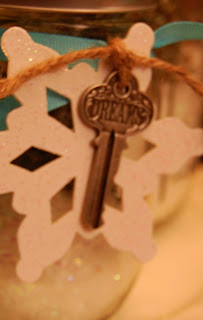 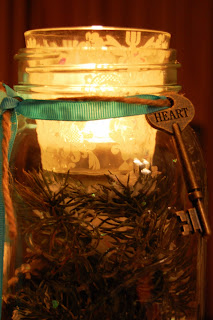 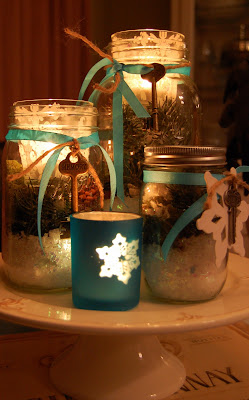 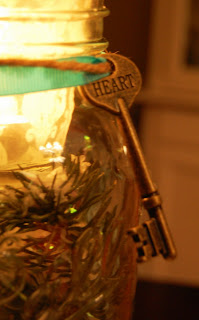