With its over-the-top floral frou-frou and crazy crimped hair, the 80s certainly had its share of bad taste. As we’ve seen over the past few posts, nowhere is this better documented than in the decade’s (now vintage) advertising.

But for all it’s cringe-worthiness , the 80s also had style.

In fact, it was the decade that the world would meet it’s most famous taste-maker.

“I invented ‘It’s a good thing’ before you were even born.”
– Martha Stewart

It was in the ’80s, that Martha Stewart really rose to fame. After a series of successful home-making books in the early to mid 1980s, Martha debuted as K Mart’s “entertaining and lifestyle consultant” in 1987 with this ad… 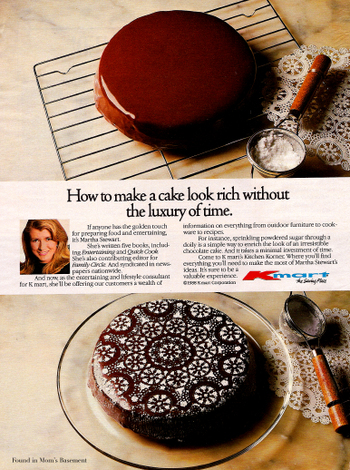 It wasn’t long before she was appearing in a series of print and television ads like this one (see right) that showed the average person how to make beautiful things on a budget.  In this ad, a long-haired, fresh-faced Martha showed us all “How to make a cake look rich without the luxury of time.”

In 1989 Martha was already well-known enough to make her first appearance on the David Letterman Show (Source: YouTube)!  When she visited again just two years later in 1991, Dave was calling her “the world’s foremost authority” on “gracious living”.  Go Martha!

Looking back on some old clips, I couldn’t help but notice how much more relaxed she seemed back then.

Check out this 1991 vintage David Letterman clip of Martha and Dave carving two 500 pound pumpkins with chainsaws!  I love how she laughs at his antics but still maintains her classic Martha polish.

Love her or hate her, there’s no denying that Martha Stewart is the queen of creating million dollar style on a penny budget!

Personally, I happen to love everything that she (and her now very large staff, lol) creates!

Only a few more ads left to come.