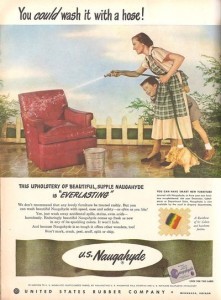 If you’ve been following along my Vintage Home Decor Advertising Series, you’ll have noticed that I’ve made an attempt at presenting these vintage ads chronologically.  That means we are almost up to the 90s.

Well, peeps, the 90s might be considered vintage by some, but personally, this girl refuses to accept it, lol.  It was the decade I finished high school and graduated with my undergrad degree, so there’s no way the 90s can be vintage yet, or that might mean that I’m vintage. Yikes.

So today’s ad, from 1990, is going to be my absolute cut-off point for these vintage ads!  Over the final days of the series, I’m going to select a few more of my favorite vintage ads from past decades.

But for today, I’ve got a great one from 1990. If vinyl, or more formally, ‘Naugahyde’, was the signature, easy-clean  fabric of mid-century decor (see above right), then the 1990s’ counterpart had to be micro-suede!

It seems that no one is exactly sure when and where microfiber was first developed, but most of the sources I read said it was most likely invented by the Japanese during the mid-1970s. But it wasn’t commercially marketed until the 1990s, which was when today’s ad was introduced. 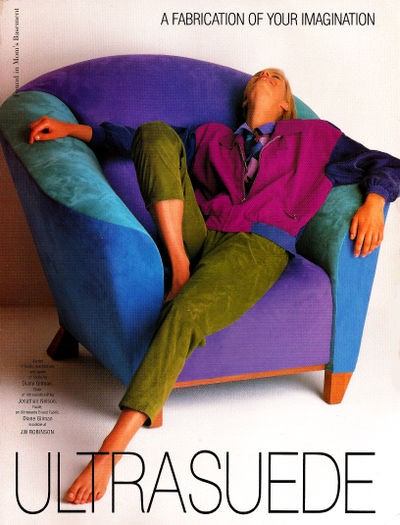 Back then (and still today, really), it was seen as a miracle fabric – so good that it was possibly “A Fabrication of Your Imagination”.  Heralded to be as soft as real suede, yet durable and simple to clean, micro-suede began showing up on furniture everywhere – just like on this ‘oh so late 80s’ color-blocked chair!  And, of course, when lounging in chair as fabulous as this, you’d have to have your very own color-blocked micro-suede pant suit to match!

Apparently, one of the big advantages of micro-suede was its ability to hold color, so that’s why you’ll see some crazy vivid furniture in this fabric.

Micro-suede is still hugely popular today, but thankfully in furniture colors and styles that are much less, um, jarring. (Although, there are still some pretty ugly pieces out there done in this fabric!)

Personally, I’ve never owned a micro-suede couch, but I do have friends who swear by them. So how about you? Is micro-suede your miracle fabric?

Hope to see you back here for the final 5 ads in the series!