This post was most recently updated on August 25th, 2012 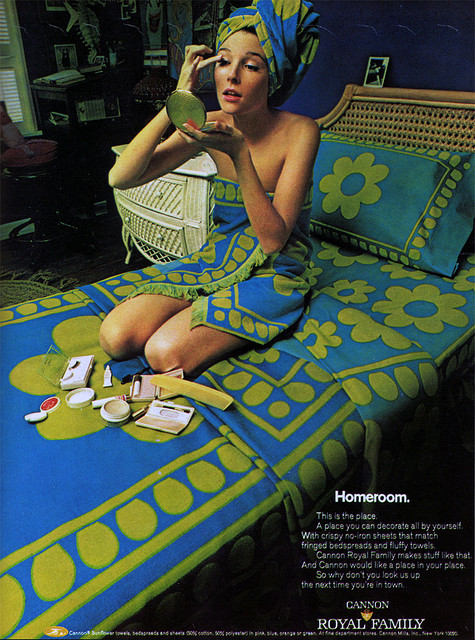 The vivid colours are stunning, and the fabric’s pattern is adorable. But what’s so amazing to me about it is just how quickly the image of females changed in the media.

Up until the late 50s, images of women were still very much connected to the conservative, wholesome “happy home-maker”. Yesterday’s post is proof in point!

Yet, by the early 60s, ads with confident and independent young females began to surface. This one, by Cannon, shows a high school or college-aged girl in her very fashionable towel , applying makeup, even false eyelashes!

It seems incredible that such a dramatic change could happen so quickly! But by the early 60s, a more liberated society had been shaped by cultural influences of the 50s like film, television, magazines and rock music. Teenagers were more influential and had much greater spending power than their predecessors, and, in turn, marketers began to target them directly for discretionary, self-indulgent purchases. (Source: www.fashion-era.com).

And, I’m sure that nothing could win over the heart of a 60s girl more than a set of pretty matching linens that reflected the geometric patterns found in the fashion world.  The copy reads: “Homeroom. This is the place.  A place you can decorate all by yourself.  With crispy non-iron sheets that match fringed bedskirts and fluffy towels.  Cannon makes stuff like that.  And Cannon would like a place in your place.”

Hope to see you tomorrow for the 12th ad in the Series when I’ll show you some bed linens from the 1970s!