The 70s are often called ‘the decade that style forgot’. And, rightly so.  Being a child of the 70s myself, even the phrase “1970s home decor” makes me shudder!  But today, I’ve got a great example of gorgeous 70s home decor: Vera Neumann bed linens.

1970s home decor is something that alot of us might want to forget. Nowhere was this more evident than in the bedroom! Isn’t it funny how very different a bedroom from the 70s was compared to the neutral, serene sanctuaries we have today?

In fact, color palette is one of the most defining qualities of a retro, early 1970s bedroom (Source: eHow: Bedroom Styles from the 1970s).  Bold contrasts and unlikely pairings were favorites of the time, as were rich, saturated colors like cobalt blue, deep yellow, orange, chartreuse and mango pink.   When these eye-popping colours were combined with the bold geometric patterns of 70s fashion, the resulting effect was often blinding!

But in amongst all this 70s bedroom bedlam, there were a few timeless style-makers who created stunning bed linens that are still widely sought after today. 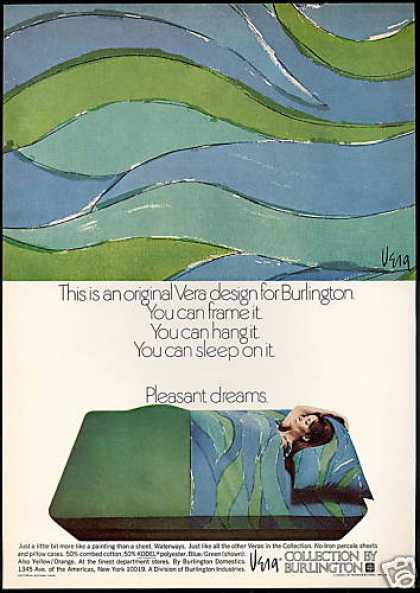 This ‘Vera’ bed linen collection for Burlington, first advertised in the early 70s, is a great example.  And, no, we’re not talking about Vera Wang here (which, I’ll admit, was my first thought before I did my research)! Before the ‘wedding-dress’ Vera we all know of today, there was another famous ‘Vera’.

The ‘Vera’ namesake on these sheets is a designer named Vera Neumann.

Vera was an artist who became one of the most successful female entrepreneurs of her time.  She was most famous in the 50s-70s for her line of bright, happy signature scarves, worn by such celebrities as Marilyn Monroe and Grace Kelly!  Her company, which began at her kitchen table in 1947, grew into a multi-million dollar international business.

She had a radical philosophy: fine art should be accessible to everyone, not just a select few. She believed that artwork should not be relegated to walls. Rather, people should surround themselves with art–wear it, dine off it, and dream under it. (Source: theveracompany.com)

Her product line grew to include scarves, apparel, home linens, dishes, wallpaper and umbrellas.  All Vera products started as original pieces of art from her own hand and sported the distinctive Vera signature (often with a ladybug) trademark. 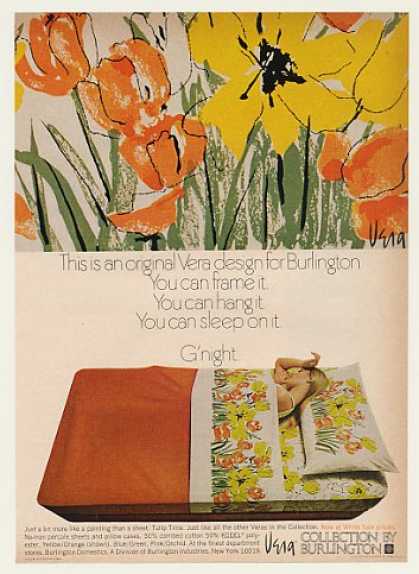 She is considered a veteran of ‘cross-merchandising’. Decades before Target was collaborating with the likes of Missoni, Vera was designing for and lending her signature ‘brand’ to a range of home decor. Go Vera!

I love how the ad respects the genuine artistry of the product, both through its imagery and its copy: “This is an original Vera design for Burlington.  You can frame it.  You can hang it.  You can sleep on it. Just a bit more like a painting than a sheet.”

Vera died in the early 90s but her (now vintage) bed linens are still in demand today, and can be found selling on e-bay and other sources.

In fact, after years of being dormant, the Vera brand has been brought back to the market, and is apparently experiencing a resurgence among both old and new fans.  It’s  selling at department stores like Anthrolpologie, Bloomindale’s, Macy’s and Bed Bath & Beyond. (Source: theveracompany.com)

Have you seen it on the shelves at any of these stores?  I’d LOVE to see what’s being produced in the line!

I think the lesson here is that even in the 70s, there were some real, enduring style-makers!